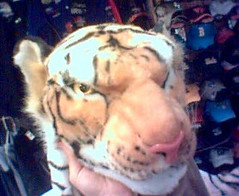 Tiger Rug Fursuit
Originally uploaded by jovino.
With all of our quests for the perfect fursuit head, we constantly struggle for hours, sometimes days on end; fabricating a plastic-mesh, foam and fake fur sculptures that we wear on our heads.

At Love's truck stop in Wasco, along Highway I5--somewhere between San Francisco and Los Angeles--they there was this dead plushie throw rug. Aside from its ridiculous camp fator, this thing had a rather impressive head.

It was made out of cast styrofoam and covered with a sewn face. Plastic eyes were just real enough looking to give the flaccid creature some life. Even the mouth was a nice bit of work. Out of interest, I held the face up to mine to see if this thing would be worth picking up for a quickie fursuit addition. Unfortunately, the head was slightly too small, and the lack of price made me decide not to bother with it.

In hindsight, I should have bought two.

I've completed enough of Chirrnobyl to make a partial. Even did special sleeves for him that aren't attached to the paws.

Click the picture for a gallery of progression photos.

I am (very slowly) working on a personal batsuit. She has been on the go for 3 or 4 years now (I think I wore her 1st head two years ago for halloween), and I am currently working on her 3rd head rebuild. Now, bats have alot of skin showing (nose, ears) and I'd like to immitate this, as best I can.

The first time, I made a plaster cast and made a latex face which I furred. There were problems with this.

Tis time, I considered molding and making latex pieces, to be added to a papier mache mask. But, rather than fooling around with the time and expense of molds and such, I am considering simiply making the bodyparts like normal, then brushing latex over top. The pieces will end up more rigid than I'd like, but they will also not end up floppy or degrade as quickly.

My questions are 1) Should I use latex for this, or will it rubb off, shrink, warp, etc. I have never had great luck with latex.

2) How shoukd I prep the piece so the latex (or whatever I use) will stick? Silicone 'dragon skin' looks/feels great and can be coloured easily, but silicone doesn't stick to anything but silicone... Urethane rubber sticks to seemingly anything, but it's harder to colour and I have never used the softer grades of it. How soft does it go? I'm not sure I want to buy 3 pounds of it just for this small bit, what else could I use it for?

3) Any other materials/methods you figure may work for this? I am also considering making 'half' molds for the ears where I make the front half from my rubber of choice, and the back from something more rigid, and then attaching them. The nose could be done similarly, where the smaller details could be cast and attached over a nose 'nub'.

my fur and velvet, winged tundra dragon partial is done!!! minus last minute adjustments for the auction page (zipper etc.). i've been working really hard on this guy, and i'm pretty happy with how he turned out. he is leaps and bounds from my first head, (the moving jaw works great!) and now i have all kinds of improvements in mind for my third :3

i'd love to hear any and all critiques and suggestions, thanks for lookin'!

And the Doujoux is the done.

Enjoy... I know Dooj does.
I am looking into making a fursuit of my own soon. I've scavenged through many fursuit sites and have endeavored many tutorials. I'm confident that I could make one, but I have one trouble. I have never seen a scaled fursuit. I would be fine with fur, but I would like to first try to make it scaled, rather than furred. If anyone has any good ideas about how I would go about doing such a thing, or if someone has a site that explains it. I would be obliged if you were to tell me!

Ok, Gots a question about something that doesn't come up with fursuits often -- hair.

The character in question has one of those Emo kid combover sort of bangs, and I have no idea how to go about it.

I've thought about taking a wig and gooing it up to keep it stuck in the right place, but it won't look like the rest of the suit. I've also considered using high-pile fur and faking it by making and shaping the bangs, but that also might look hokey.

So, those of you who have done hair -- how the crap do you get it to work?
Collapse